Over 200 Maine K-12 schools nearly 1/3 of all 550+ schools in Maine as well as colleges, libraries, and after-school programs hosted Hour of Code events in 2014!

The Hour of Code is a global movement reaching tens of millions of students in 180+ countries. Anyone, anywhere can organize an Hour of Code event. One-hour tutorials are available in over 30 languages. No experience is needed and the games are fun for all ages, from 4 to 104! 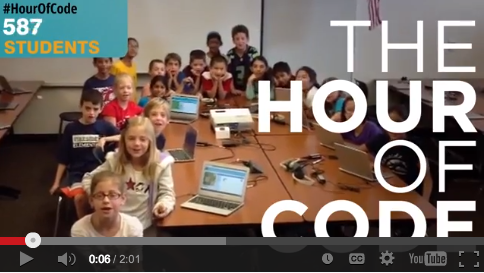 This year, the Hour of Code campaign during Computer Science Education Week, December 8-14, 2014 aimed to introduce 100 million students to one hour of online games and unplugged activities to raise awareness of computing and digital learning.

Anyone can host an hour of code event: schools, after-school activities, community organizations. One school in each state received a $10,000 grant. You can learn much more about hosting an Hour of Code event here: hourofcode.com/us

Over 200 Maine schools, colleges, libraries, and after-school programs hosted Hour of Code events in December! See the list below; teachers signed up here. But even if your school didn't participate, you can go to Code.org and earn your own Hour of Code certificate.

Maine middle and high school students: Would you like a free 1GB USB wristband? Just tell the Reach Center about your Hour of Code experience (and while supplies last) reachcenter.me/hourofcode and they'll send you one!

To celebrate Computer Science Education Week, Project>Login hosted an Hour of Code Lab and workshops with staff from the MIT Education Arcade at the Maine Digital Festival, during the Maine FIRST Lego League championship on December 13 at the Augusta Civic Center. Learn more!